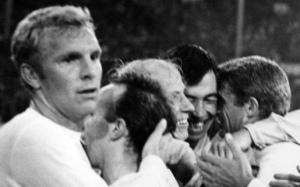 Time to forget the ‘argie bargie’

And move on to a match

That was far more worthy.

As England take on Portugal

But still that defence has not been bested.

Half an hour in

We mount an attack

And truth to tell

It starts from the back.

Wilson passes it forward to Hunt

A shot from him

Is stopped by the keeper

To knock it back in.

With waves of emotion

And ten minutes to go

We rise as one nation.

A shot from Peters

Who hammers it home.

And the other Charlton

Responds to a moment

As a header from Torres

Makes for the net

Puts it out with his hand.

With a penalty blast

Is breached at last.

But the match was over

The game had been won

Thanks for sticking with this. Building to our climax now…. And our cameo role in the saga.